In Edgeryders, we study  and practice collaboration, especially online. Time and again, we find it the most powerful force that people with next to no wealth and no power, like us, can evoke. We are getting good at it, though much work remains. Proof: we are a mutant company with no office, no investors, no business plan. We have nothing but each other – a tiny core of founders, and the Edgeryders community. And yet we are out there, with top-notch global organizations among our clients, and we are growing. 2016 has been a good year for us – we’ll be blogging about this soon.

2016 has also been a year of uncertainty and discontent in world politics. Many people dear to us are sad, angry or scared. Almost no one seems satisfied about their politics and their leaders. That goes both for the losing camp and the winning one. We consider this contrast, and wonder. As a culture, we are getting better at working together in diversity. Why does this not translate into more constructive politics?

As we looked into this, we realized that our default frame for politics is combat. There are opponents and allies. Its protagonists focus on winning. This is understandable but useless, except maybe as a spectator sport. What happens if we drop this frame and adopt a collaboration frame instead? What would happen if a political entity were run like a collaborative project? What would happen if lawmaking worked like Wikipedia? What if policy happened like the next release of Apache or Ubuntu?

Could there be another space to get down to building? A terrain so hyperlocal and fragmented as to be too expensive for narcissistic strongmen and Machiavellian schemers to enter? A move so lateral that it will not even exist in the same space as post-truth politics?

We don’t know, yet. But, in the wake of the dark tide of 2016, we see people in our network asking new questions. Something new, something big is on the move. As always, we will stand by our community, and help as best we can. If you, too, have been waiting for something to get in motion; if you want to be a part of building it, and figuring out where it takes, get in touch. Nadia will be revealing some of our immediate plans at AdaWeek in Paris, on November 22nd (info): if you can’t make it there, get in touch with her or join our mailing list.

I have the honor to have been invited as a panelist to the third European Outreach Meeting of the Open Government Partnership, in Rome. The chair – my friend Guido Romeo at Wired Italia – had given me a fierce briefing: give the room a how-to list for involving citizens in collaboration with government institutions. In less than five minutes, in English and without using slides. So I complied as best as I could – it took three minutes, and a lot of simplification.

After the panel, a few kind souls came up to me, congratulated and asked if I had any writeup. As a matter of fact, I did: I had saved my notes in a draft email – as close as it gets to the digital version of a paper napkin. So, here it is. Enjoy. 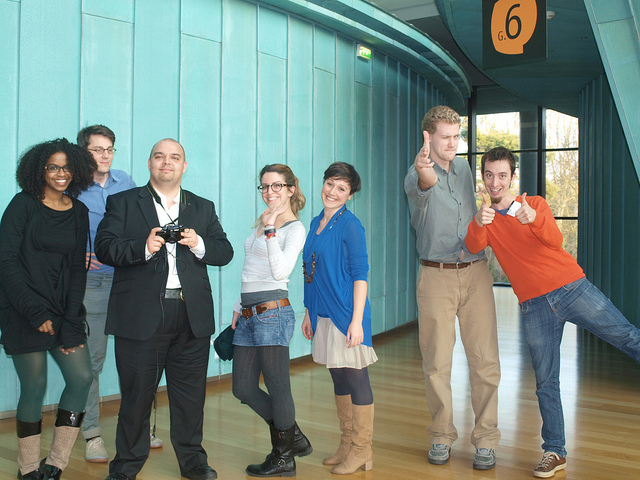 I have been studying Internet-enabled collaboration between citizens and institutions for some years now. I have had the chance to explain its basics to many people from different backgrounds. There is a point that has almost everyone take issues, at least in the beginning when I say online collaboration works so well because participants are not selected by anyone. This is counterintuitive. How can an unfiltered environment perform better than one where participants are carefully chosen? And yet, that’s the way it works, thanks to the combination of large numbers (unfiltered spaces are more crowded, so they have more brainpower to throw at issues) and self-selection (people flock to spaces where the discussion is about things they are knowledgeable and passionate about). I am well aware I will have to repeat my case over and over, but as far as I am concerned the case is closed. Online collaboration between citizens and institutions works. Get used to it.

This brings a new figure to political processes: the citizen expert. All successful experiences I know have produced authoritative figures, citizens who are passionate about the discussion and bring to it contribution of astonishingly high quality. These people are typically complete unknowns: they seem to materialize from nowhere, but they become very important to the processes and take observers by surprise for the quality and integrity of the role they play. Davide Davs’s air pollution graphs in the Area C group attract a lot of attention, and they have more or less established in that space the principle that it is a good idea to back your claims with data.

All this works well online. My team and I have decided to run an experiment within Edgeryders, the project I manage at the Council of Europe: bring our citizen experts to an offline event, Our idea is this:

I am convinced that the results will be extraordinary. All the conditions are there: policy makers can explain the latitude and the limits of their mandate; academics contribute with statistical data and analysis. Citizen experts can bring to the table the “living data” of their experiences, which generalize to ideas and proposals more naturally than you may think. If there are enough of them (and there will be) they can also contribute by seeking consensus on certain points, like a large focus group. Thanks to the months spent interacting in the Edgeryders platform, our way to discuss has been washed clean of normative thinking (“the world should not be like this!”), non-demonstrated statements (“it is clear that the age of capitalism is coming to an end”) and trolling (“you are all slaves to big business anyway”). Participants have recognized each other as partners in this particular effort – the Edgeryders researchers themselves use the platform to interact with the community they are a part of – and that makes us free to spend our time at the conference actually getting things done. We did a small-scale prototype in March – a workshop, open to a few community members – and it went really well: the discussion was productive, effortless and fun. It shows even in the photos!

We believe in this solution so much to invest in a quarter of Edgeryders’s budget in the conference – i.e. in covering travel and accommodation costs for citizen experts. We should be able to cover 100 to 120 people, mostly young, converging onto Strasbourg from all over Europe on 14 and 15 June. The community is already organizing an unconference for 16-17, so as to have more time to hang out and plot out our common future. If you care about the transition of young people to an independent active life, think about putting yourself forward to be a citizen expert: on the Edgeryders blog you can find out how to get an invitation, the program and Vinay Gupta’s call to arms. Why, you might even find yourself being part of a small innovation: a new online/offline interaction format for citizens-institution collaboration!