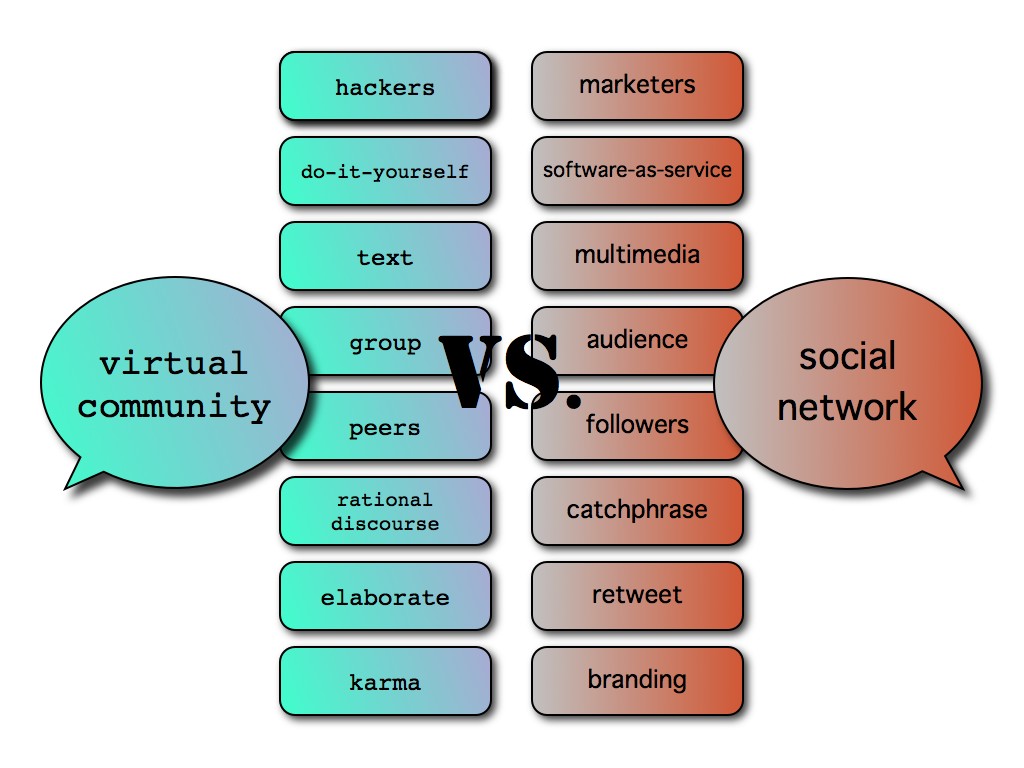 As I re-read the excellent The virtual community, I can’t help comparing the sense of “communion” that Rheingold associated with the WELL with the displacement I sometimes feel on social networks a.d. 2009, described very well by Enrico in his farewell to Facebook (in Italian). How did we end up here, if the Net in 1993 was that described by Rheingold?

I am wondering whether this has anything to do with the business-endorsed effort to reinterpret the Net as a tool for brand communication and marketing. I have nothing against marketing, which is the source of livelihood for many people who are dear to me, online an offline. But I don’t like that in modern-day social networks your “friends” are sometimes people, sometimes companies, sometimes people who, at times, speak for companies. Advertising is pervasive, sometimes in a sneaky way – so that you find ourself exposed to promotional messages in a relational context, without warning. It’s like inviting some friends over for dinner, and one of them uses the gathering to try to sell insurance bills to guests. It’s embarassing. And its net effect is, predictably, mistrust: every human contact on the net begins to feel suspicious, banalized.

In the 1600s, in England, enterprising individuals started to build fences around the traditional common lands to farm them, and appropriate the proceedings. That destroyed an important economic resource for the poorest families; but it was not forbidden. It would have been stupid not to take advantage of it. If they had not done it, others would. An annihilation of the common lands ensued. Now, it seems to me, the transition from virtual communities to social networks implies the annihilation of the digital commons” – created by government-funded research in the Sputnik era, and now appropriated by business for advertisement and entertainment purposes: with the additional problem that, weakening the hacker ethics of sharing, it is not clear what will happen to the Net’s formidable innovation-enabling capacity. It is legal, certainly. I ask myself, and you: is this unavoidable?