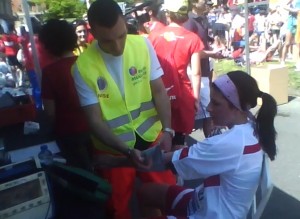 Two weeks ago, as I was training for the Milano Relay Marathon, I received an unexpected email. It was from insurance company Europ Assistance, which offered all athletes discounts on its health insurance products. It came as a surprise, because I am careful to deny my consent to my data being used for marketing. I called the trainer of our group, who had taken care of entering us into the race, and he assured me he is very careful about that too. Maybe, he said, Europ Assistance got through the privacy barriers because it actually delivers a service to athletes: health insurance for the duration of the race. I got to the finishing line and there they were, measuring “health parameters” and, I am sure, promoting their products.

The rationale of an aggressive marketing towards long distance runners are clear. Insuring anyone who runs a marathon is profitable, because she is likely to be quite healthy and will be paying up for years before requiring that the insurer pays for treatment. I wonder if insurance companies are tempted by the reciprocal strategy, that of NOT insuring people who do not show up in the myriad databases associated with a healthy lifestyle (members of sport clubs, gym aficionados etc.). This kind of behavior is advantageous for its perpetrator (in this case insurance companies), but socially harmful (risk is not spread, and people who need care most can’t get it). Should this happen, private insurance would prove an inadequate solution to the health care of the citizenry, and policy makers should build and protect national health services.

Incidentally, the list of participants to the Milano Relay Marathon is far from the the most potentially momentous database from the point of view of the companies. Genomic startup 23andme sequences your DNA based on a sample received by mail, and computes your “risk factors” for 100 diseases — for $99. In the discussion on the social consequences of a pervasive Internet I see many people trying to scare their fellow citizens with stuff that most experts consider unfounded: we will unlearn to read any text longer than a tweet, we will shut ourselves in our homes to chat with strangers online instead of living the rich social life of our elders, we will bump into paedophiles and terrorists in every other social networking website. Internet skeptics are good at whistle blowing; they could be very useful to society by blowing the whistle for the real risks, like those associated with the inevitable loss of privacy on health data. And we that care about open data (and love data about our own running) had better meditate on whether transparency can become too much of a good thing.

Since about a year I have been running somewhat regularly. I started just to have an alternative to the gym when I am on the road, but my motivation have gotten deeper since. Running opens a door on a new and interesting path, not just for me but for all of us.

Here’s the thing: running generates data. A lot of data. Data about us. And we consume them, with ever-growing appetite.

Consider, for example, the Stramilano half marathon, which I run just Sunday. Its over five thousand participants were possibly the most technology-enhanced large group I have ever been part of. Each runner bears a number tag which incorporates a transponder; combined with the sensors scattered along the route and a precise chronometer, this enables very precise tracking of the bearers’ performance. Here is mine:

There is a lot of information in this table. Not just my final absolute- and category placement; not just my official (from start to finish) and real (from the moment when I crossed the starting line to when I crossed the finishing one) time; but all of these, plus cumulated average speed, at four different checkpoints 5, 10, 15 from start and at finish. As you can see, I had a few problems in the early stages, with a low average speed of 5’12″/km (I got stuck behind a phalanx of slower runners). Then it got better: my average speed increased to 4’30” for the following ten kilometers, then decreased slightly again for the last six. At the start I had probably some 4,000 runners in front of me; after 5 kilometers I still had 2,500; in the last sixteen kilometers I overtook almost 800 more. My worst mistake was not try to get further towards the front of the starting grid; this cost me something like two minutes of rel time and three on official time.

But this is just half the story. Practically every athlete in there was equipped with some form of data generation and monitoring: GPS units in their pockets, accelerometers inside their shoes, heart rate monitors on their chests, chronographs on their wrists. Data were processed locally and fed back to the runners in real time; after the race they were downloaded on massive cloud computing systems and processed again to keep track of progress and programme future training. I, for one know full well that I have run 609,17 km since late July 2010. It took me 51 hours, 3 minutes and 3 seconds, at an average speed of 5’03″/km and burning 39.305 calories. I know absolutely everything.

This knowledge gives me control. The data, once processed and interpreted, make us faster. Athletes with a little experience use them to decide on competition strategies. If you run in large groups, you’ll hear beeps and alert going off at every turn, and it is not uncommon to hear remarks like “we are ten seconds late on our flight plan”. The Stramilano crowd was running amidst a cloud of computation.

Running is just an example of a general trend towards an ever-increasing computational density of our lives. We monitor, record and quantify our trips, our social and professional networks. More and more often we do the same for our physical existence, tracking metrics like weight, glucose levels, body fat. We sequence our DNA. For each of these metrics, be they social or physical, we have online services that allow us to share them with others and turn them into conversation topics (and we do it, not overly concerned with privacy). Americans talk of “quantified self”: it is a rapidly growing movement, because data allow us to explore how our bodies react to different stimuli, and adjust our behaviour accordingly. If I discover that a certain training routine improves my performance, or a certain diet lowers my body fat, I can use them to meet my goals in terms of running, or just looking good. If I quantify my body, it becomes easier to hack it.

The word “hacking” in this context is exactly right. Like the original hackers, body hackers are outsiders to the system, so they can afford to be radical. Like Tim Ferriss says: “I am neither a doctor, nor a Ph.D. I don’t have a publish-or-perish career. I can test hypotheses using the kind of self-experimentation mainstream practioners can’t condone. By challenging basic assumptions, it’s possible to stumble upon simple and unusual solutions to long-standing problems”. Spoken like a true hacker. In other words, I teach myself some knowledge, then I use a low-access technology to tinker around. When enough people do that, open innovation happens.

The Stramilano half marathon was a wake-up call: self quantification is becoming a mass phenomen. Expect a wave of open innovation, and a new generation of hackers. But this time it will be our own bodies acting as both labs — and prototypes.