Online communities have been my Swiss army knife for the best part of a decade. I tend to throw an online community at every problem I face – and that’s not limited to work: even my wedding party was organized that way.

We all know online communities have interesting properties, but how much can we control them? Can we “farm” them, growing one around each problem we are interested in? How expensive is this likely to be? These questions are relevant for my work, because we can’t use them as tools, as I tend to do, without some degree of control on them. I simply need to know if my intuition of online communities as general purpose collective intelligence tools is grounded, or if I am just delusional. As part of obsessing on this problem, two years ago I started a semi-structured research project, which is supposed to become a Ph.D. thesis. Some of the results are now in: the executive summary is that there seems to be evidence for our ability to artificially grow an online conversation about a specific problem.

I am using data from a project called Edgeryders. It was meant as a “distributed think tank”, an attempt to grow and harvest a large-scale online conversation around the task of building a proposal for reform European youth policy. The project was led by the Council of Europe and co-funded by the European Commission; it took place between late 2011 and the end of 2012. I was its director, as I worked at the Council of Europe at the time.

Edgeryders was based on an online interactive platform; its database if the source of all data described in this post. It worked like this: my team would ask it research questions grouped by topics (topics were broad issues like employment and income generations, education and learning etc.). Anyone was free to join and provide answers in the form of blog posts. All such blog posts were commentable for validation. By the end of the exercise, it had about 1200 registered users. Most were “lurkers” who never wrote anything on the platform. Those that did contribute were 260; collectively they wrote 500 posts and over 4000 comments. This material was analyzed by ethnographers, who used it to construct a publication on youth issues as seen from the youth themselves. The researchers obviously found Edgeryders material relevant for the task at hand. This, however, does not per se prove that we could really “farm” an online conversation around the issue of youth policy: maybe we simply intercepted a need to discuss the issue, and our efforts to grow and steer the conversation were in vain, or even counterproductive.

A small team of moderators devoted part of their time to encouraging users to share and discuss their point of view using positive reinforcement. This was a policy in the strict sense of the word: they were paid and instructed to engage users, especially first-time ones (“Hey, X, this is really interesting!”) ; ask them questions conducive to extracting issue-relevant information from the conversation; and connect them with other users with similar interests or approaches. Sometimes this would happen spontaneously, as the members of the Edgeryders community engaged one another; but when this did not happen by itself within hours of somebody writing a new post, the team of moderators was tasked with “breaking the ice.”

To assess the impact of the policy on the conversation, we proceed as follows. First, we model the Edgeryders conversation as a social network, whose nodes are active users and whose edges are comments. The network is directed: user

is connected to user

With dynamic network analysis still in its infancy, the main challenge to address this question was how to capture the time dimension of the data. I adopted the approach of “slicing” the course of the project into 57 one-week time periods, ranging from late October 2011 to December 2012. For each period I extracted the corresponding subgraph, using the following conventions:

The final subgraph has 260 nodes and 4041 edges, many of them parallel to each other(same source and destination, different dates).

Once I had the slices, I needed a model of individual user behaviour that I could run against the data. The natural thing to do, with network data, would be to stay with a network approach, and estimate

is the number of nodes

is the probability of user

. Unfortunately, this is not computationally viable. So, I collapsed network information into a vector of variables attached to each user, and allow it to vary over time. This transforms the problem into one of estimating

Once ego- and global network metrics have been computed for each time slice, this problem is tractable by panel data statistical techniques. Incidentally, notice that the relatively small size of each time slice – only one week – was chosen to capture the signal of the many lagged variables I had to use to avoid endogeneity issues. This, however, has the flip side of making most users inactive at most periods (13710 observations out of 14820 take value zero). This makes the dependent variable almost, but not quite, binary (taking value “nothing” in most cases and “something” in the rest). Therefore, the estimate was computed using a negative binomial model with fixed effects. This model estimates mostly the effect of regressors on activation (the probability of users to become active), but – unlike fully binary models like logits – it also uses the extra information encoded in users writing more than a post or comment in a given period.

An even more fundamental flip side is that this “flattening” of the network into a vector loses key information about the identity of who is connected with whom. In this first iteration, I kept track of whether inbound and outbound comments for each user come from moderators or non-moderators. Other refinements can be added.

Preliminary data exploration shows evidence of structural change in early April 2012 (period 21). This corresponds to the date when a major Edgeryders conference, to be held in June the same year, was announced. People involved in the project confirm that this announcement was a game-changer in the project, as it made the Edgeryders proposition to its community much clearer and more credible – we referred to it as “addressing the what’s-in-it-for-you question”. We promised to cover travel expenses for about 50 contributors to the platform to get together in Strasbourg and flesh out the policy document that the Council of Europe would then advocate with respect to the European Commission and its own member states. We could spot structural differences across three subsets of the data: the first one describing activity in the interval before period 21; the second one describing activity of “old” users (who became active before period 21) after period 21; and the third one describing activity of users who became active in periods 21 and later.

The results of our negative binomial estimation for the whole dataset and for each of the three subsets are visible below.

To a first approximation, these results hold two lessons.

Result 1 has clear implications for online community managers running collective intelligence exercises. It says that user activity propagates across the conversation network, with each user receiving an impulse from in-neighbours and retransmitting it with its own input added (with some probability) to its out-neighbours. This is consistent with this paper by Nathan Hodas and Kristina Lerman, who find that contagion models explain well the spreading of information across online social networks after accounting for meme visibility as constructed by the designers of the online social networks themselves. The overall picture is reminescent of neural networks, a topic that I know little; it might be worth exploring this similarity further, as neural networks are in a sense a natural modelling choice for collectively intelligent organizational arrangements. 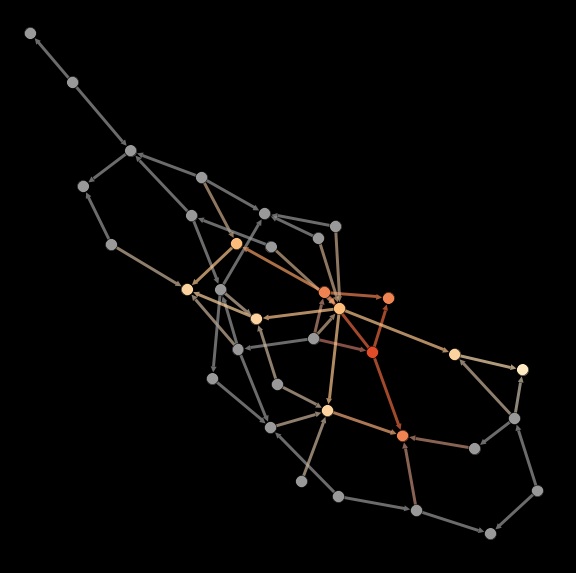 Contagion in a random directed network. Starting from the bright red node in the center (the moderator), the signal travels across the network.

In a policy perspective, the result is saying that you can indeed “farm” an online conversation  by deploying one or more moderators/animators to interact with users. It works like this: a moderator engages directly some users; this increases the probability that they will become active; if they become active, this increases the probability that these first users out-neighbours will also become active and so on. This confirms anecdotal evidence: for example, as Shirky relates (source), photo sharing web 2.0 company Flickr deployed its own employees as the first users of the website, so that, when unpaid users came online, they found a lively conversation going on. Caterina Fake, Flickr’s CEO, reportedly remarked “You have to great the first ten thousand users personally”.

For online community managers, such a policy has two attractive properties.

So, the model’s implications for the community managers wishing to “farm” an online conversation around a specific topic can be translated into two simple rules:

The more activity and connectivity there are in the network, the less the conversation needs moderator effort to keep going. This is not so intuitive, and indeed online community managers tend to think it is the number of users, not the number of connections among them, that drive a conversation towards being self-sustaining. Again, if true this is excellent news for people who, like me, deploy online networks to attack problems by a collective intelligence approach, because it implies that you can get nearly self-sustaining (hence cheap to maintain) conversations even with relatively small networks, in the hundreds of low thousands of active users. This is because the potential connections in a graph grow quadratically with respect to the number of its nodes, so for a given level of performance, moderators can reduce costs both by attracting new users and by connecting existing users to each other.

In the context of the CATALYST project, I am involved in an effort to build easy-to-install social network analysis software for common CMSs. Based on the above discussion, what should this software monitor? I would suggest:

What do you think?

I wish to acknowledge the role of the Council of Europe in launching the project and firing me to lead it; of the University of Alicante, the INSITE project and IUAV for supporting my research; and to Giovanni Ponti, Luigi Di Prinzio, Guy Melançon, Benjamin Renoust and Raffaele Miniaci for their invaluable help and generosity. Financial support from the Spanish Ministerio de Economía y Competitividad (ECO2012-34928) is gratefully acknowledged.