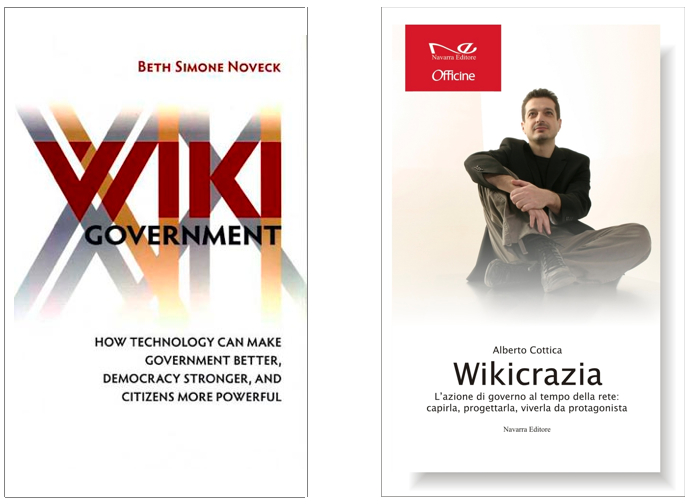 I admire Beth Noveck‘s work, and I have been following it for years. American, NYU professor, blogger (her blog is a precious source for me), Beth is the founder of Peer to Patent, the first 2.0 project of the American Federal administration. Peer to Patent was much praised by candidate Obama; later, President Obama appointed Beth Deputy CIO to lead the White House’s Open Government initiative. In 2009 she published an excellent book, The Wiki Government, to tell the Peer to Patent story and discuss the implication of a collaborative approach to government.

My own trajectory feels a bit like a smaller scale model of Beth’s. The blog, the first 2.0 project of Italy’s central government administration, the book. We have been in conversation for about a year now: she generously contributed to my book, and even co-authored its preface. So, I am happy and proud to have the chance to work with her: we will hold the two keynote speeches in a public discussion on the Wiki government’s phase two, that of going from cool experimentation to standard work modality for government of all levels. The event will take place on May 26th in Rome, at Sala Capitolare of the Senate, and will be chaired by the Deputy Chairman of the European Parliament Gianni Pittella. At the helm of the organization is the excellent Fabio Maccione (thanks!) from Fondazione Zefiro, and you are all heartily invited. Register here. Jacket and tie are mandatory for men.

3 thoughts on “With Beth Noveck in Rome: parallel stories of the Wiki government”