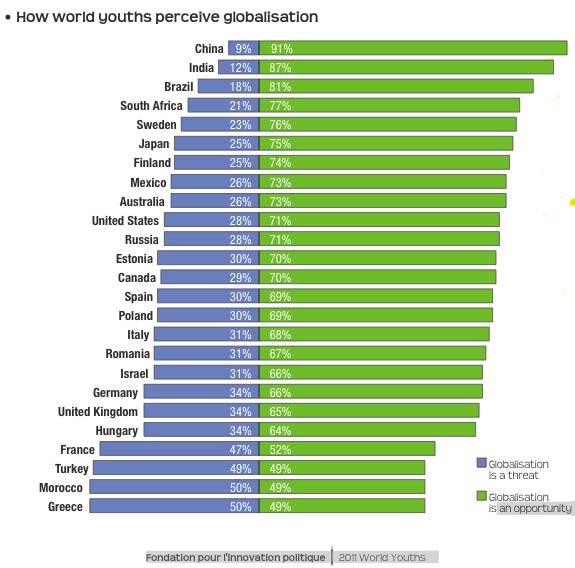 The Fondation pour l’innovation politique 2011 report on World Youth contains the graph reproduced above. Opinion polls need to be taken with a very large pinch of salt (people tend to lie when responding), but it is enough to give you pause. It’s gone full circle: ten years ago the establishment was pro-globalization and the young protested against it. Now the establishment gives signs of uneasiness about globalization, and the young embrace it. What gives?

Quite possibly, Joseph Stiglitz was prophetic in his 2002 book: globalization has been seriously mismanaged, but over and above mismanagement it is generally beneficial, as it provides for previously unthinkable opportunities. Youths worldwide – significantly, more so in the developing countries – are simply recognizing this.

Yet there may be another, more unsettling explanation: that the young (especially the educated ones) are switching their allegiance away from their countries – less and less able to give them a meaningful life, less and less interested in doing so – and over to their peers. The globalized economy and society is where the opportunities are: where will the young stand if it comes into conflict with the old nation states?