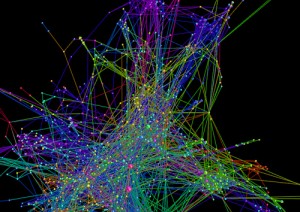 The more I use the Internet, the more I grow fascinated with networks, because they behave in unexpected, counterintuitive ways. They seem to summon order from chaos as if by magic. Consider the web: large masses of amateurs who don’t know each other and have no command structure should produce some kind of shapeless informational blob, right? Wrong. Day after day, people and content inexorably self-organize in such a way that they are one or few clicks away from each other. Building an exhaustive map of the Internet is impossible, but finding any one thing in it is quite easy. It is a bit like sticking your hand in the proverbial haystack and finding a needle, every time.

The more I study networks and the more they amaze me for their ability to organize information, in an apparently effortless way. Reading the history of scientific exploration of social networks is almost dizzying. Stanley Milgram gives random American letters for other random Americans asking the former to deliver through an unroken chain of aquaintances, and a surprising number of them reaches home in very few steps. Mark Granovetter discovers that aquaintances are more effective than close friends or family in finding us jobs. Fredrik Liljeros looks at a network of sexual contacts, and concludes that the existence of a small number of very promiscuous people renders AIDS impossible to eliminate. Nathan Eagle finds that the prosperity of a small area can be predicted from the pattern of allocation of calling time across their contacts of that area’s inhabitants (in poorer communities people spend a higher share of their calling time with one or two contacts). All these results seem independent of the actual people in the networks: in almost all models nodes are identical. All the action is in the link structure. Network papers are academic, but somewhat alien: Hogwarts comes to mind.

I am convinced that the properties of networks can help explain many phenomena that we experience every day but don’t really understand – and give us anxiety. Why do we feel surrounded by young, successful entrepreneurs (though there’s not that many of them)? Why were peer-to-peer file sharing services fatal to the recorded music industry? How does Wikipedia work so well?

My Holy Grail is to tame online social networks, forging them in a powerful, precise tool to design and deliver public policies. I have done it before in Visioni Urbane e Kublai, but a lot of time I had to steer by instinct. I was lucky, but for this to become a generalised method I need to understand it a lot better. So I study the language of networks: these days I am often at the European University Institute in Florence, to attend Fernando Vega-Redondo’s Complex Social Networks course. It’s a bit tough (I get up at 5 a.m., because Fernando usually lectures at 8.45 sharp), but so be it. I really need to understand this thing.

4 thoughts on “Do you speak networks?”